Every so often, someone will declare that the latest sci-fi franchise is “The Next Star Wars!” Depending on who it’s coming from, this can be done either as marketing shorthand, or sometimes from outright fannish enthusiasm. Of course, such arguments are ultimately moot, as Star Wars will be the ‘next’ Star Wars for as long as Disney keeps on cranking out sequels and spinoffs. Which Disney will do as long as they keep making money. Which means forever, pretty much. 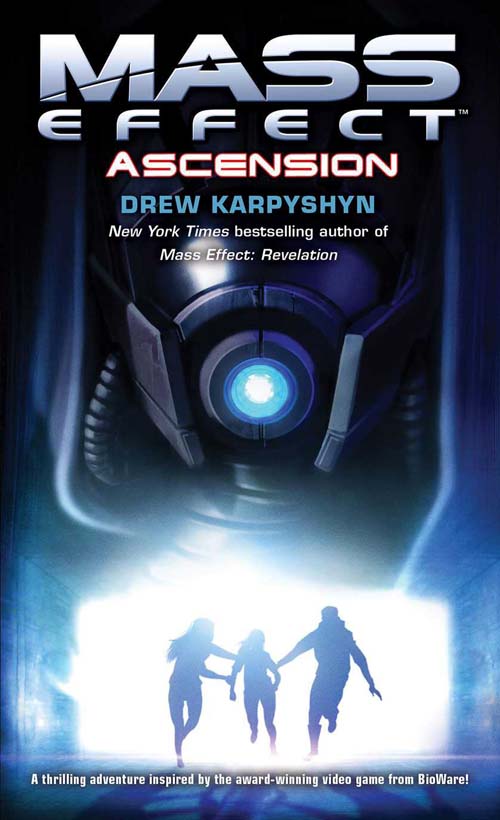 A spinoff novel! Featuring none of the characters you liked from the game!

It takes more than just some spaceships and laser guns to be ‘The Next Star Wars,’ though. No, what you need … is an expanded universe. Which is what brings us to Mass Effect: Ascension.

And so, when I stumbled across Drew Karpyshyn’s Mass Effect: Ascension in the dollar bin, I scooped that right up. Now, just about anybody (and I mean anybody) can seemingly write ‘official’ fanfiction for a given franchise these days. I know I’ve read far too many Star Wars EU novels for my own good. But, what got me really interested in Mass Effect: Ascension was the fact that it was written by Drew Karpyshyn– one of the lead writers of the Mass Effect games. So that makes it more canonical (and therefore better), doesn’t it?

Well.
Mass Effect: Ascension is the second of Karpyshyn’s Mass Effect novels– the first was a prequel to the first game, detailing the background of Saren, the first Mass Effect’s main villain. In turn, Mass Effect: Ascension takes place in the gap between the first and second games, and details … uh … some stuff? It centers around Kahlee Sanders, a scientist working at the Jon Grissom Academy– a school for brilliant children, including ‘biotics’– Mass Effect’s pseudoscience version of space-wizards. So Space-Hogwarts, essentially. It’s worth noting you actually get to visit the Academy and meet Kahlee Sanders in Mass Effect 3, so that’s kind of neat, right?

Anyway, the plot revolves around one of Kahlee’s students, a girl named Gillian. Gillian kind of has a ‘Hollywood Autism’ thing going on, in that she’s shy and withdrawn and doesn’t speak much– but she’s also really good at a particular skill. Which, in this case, happens to be telekinetic space-magic. Kay. Problem is, Gillian’s super-space-magic is somehow the result of experimentation by a Human-Supremacist conspiracy called Cerberus. And when the Illusive Man, Cerberus’ head honcho, decides he wants Gillian back, things start going south from there.

Mass Effect: Ascension was released in 2008, while the second Mass Effect game hit in 2010. Cerberus plays a major role in ME2, and ostensibly Mass Effect: Ascension was supposed to set them up … but, well, apart from a couple of exposition-heavy pages early on, there’s not too much to flesh Cerberus out other than ‘these guys are jerks.’ Which … kind of goes into their in-game characterization, but not in a good way? Basically, Cerberus is a supposedly ultra-powerful, planet-spanning conspiracy that has a real inconvenient habit of cooking up mad science projects that summarily turn around and rebel against them. Which could be a really fun mad-scientisty take on things, it’s just that Karpyshyn and everyone else at Bioware wants us to take Cerberus seriously.

I kind of get the impression that Karpyshyn saved all the good stuff for the actual video games. Sanders and the other characters of Mass Effect: Ascension come off as a little generic. What’s worse, though, is that large chunks of the book don’t feel very Mass Effect-y. The games are full of weird alien races to meet and cool locations to explore, but Mass Effect: Ascension doesn’t use this to its full advantage. Things finally pick up about 200 pages in, when Sanders and Gillian and co. wind up visiting the Migrant Fleet– the home of the planetless Quarian race. It’s actually a really neat look into Quarian culture– but it’s also too little, too late. On top of that, the book doesn’t have the kind of action-adventure shootiness one would expect from a book based on an action game.

The problem with Mass Effect: Ascension (and likely with most other ME tie-in stuff) is that the best part of the Mass Effect franchise … is you. One of the strengths of the Mass Effect series is the ability to customize your character, Commander Shepard. Not just in appearance or character class, but in behavior. You can be a super-goody space savior, or a snarky anti-hero, or even a more nuanced combination of both. As Shepard tears around the galaxy shooting robots and romancing blue space babes, the decisions you make carry over to the next game, and the game after that. No two playthroughs are the same. Characters– or entire races can die depending on the choices you make. Which is great for a series of video games, but not so much for an Expanded Universe. Though I will take this opportunity to mention that the only real Mass Effect canon is my playthrough, starring Paragon Soldier Femshep. Also this canon stops right before that stupid Reaper hologram kid shows up in the ending of the third game.

I went into Mass Effect: Ascension hoping for rollicking space opera adventure and snappy dialogue. What I got was … not that. It’s a shame, really, as the novel format has the potential to delve into stuff that would never make it in the games, due to budget or marketing or whatever. Instead, the requisite distancing from the ‘actual’ Mass Effect plot and characters makes the book a lot weaker. Mass Effect: Ascension takes too long to get to the cool bits that make Mass Effect, well, Mass Effect. Removing those elements just leaves a generic sci-fi adventure that frankly isn’t that compelling. But hey, crappy tie-in novels are just a sign of being a “real” franchise anyway, right? Bring on the action figures and lunchboxes!

Seriously, a Garrus lunchbox would be rad.