What do you do when you’re way behind on your reading backlog due to … uh, everything in the year 2020?

Thankfully, in this case ‘shorter’ doesn’t have any effect on the quality. There should be a particular word for the “short paperback that does a deep-dive into entertainment” format, because I seem to keep finding a lot of them. I mean, Boss Fight Books does video games, 33 1/3 does albums, The New Hong Kong Cinema does Hong Kong new wave cinema, and now I’ve stumbled across Pop Classics. And they do … a little bit of everything, I guess? Other books cover everything from Paul Verhoeven’s Showgirls, to the career of Nicholas Cage, to cult TV show Twin Peaks, and more. And they even take pitches on their website! (Naturally, I could easily hammer out 40,000 words about the Transformers franchise, but they want people with other published stuff under their belt. Pooh). 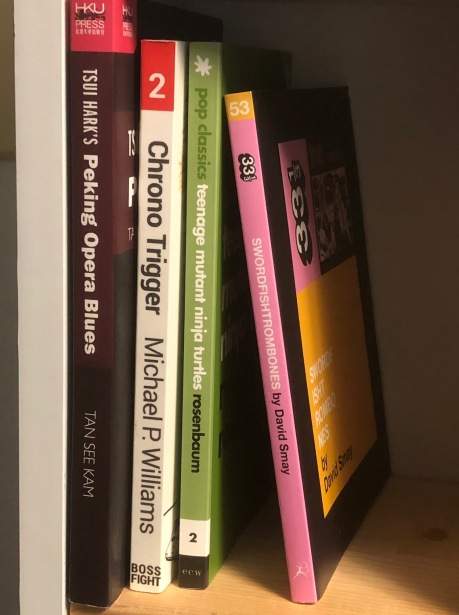 All these books are all SLIGHTLY different sizes, which bothers me to no end.

Which brings us to Teenage Mutant Ninja Turtles, which is about, well, the Teenage Mutant Ninja Turtles franchise. Richard Rosenbaum comes at the franchise from a place of lifelong love, and neatly lays out the history of the TMNT, from its indie comic book beginnings to when creator Peter Laird sold the rights to Nickelodeon, and the subsequent CGI cartoon. Published in 2014, the book comes just before that awful live action TMNT movie— as well as its 2016 sequel which actually didn’t suck? Kind of a pity, as I would’ve loved to read Rosenbaum’s takes on both of them. 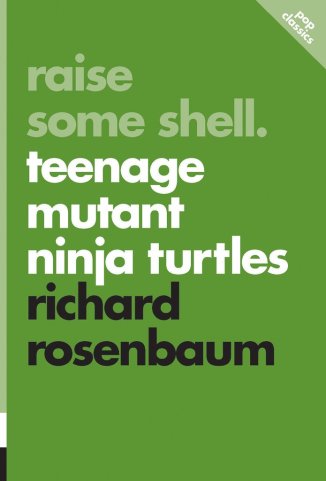 Teenage Mutant Ninja Turtles isn’t just a history of the franchise, however. It’s also a critical analysis. Rosenbaum digs deep into the underlying themes of alienation and mutation in TMNT, and how it works as a pastiche, rather than a parody. I mean, the dude compares TMNT to the works of Franz Kafka and Salman Rushdie, and it actually makes sense. It’s the kind of thinking about a pop culture franchise that you literally won’t get anywhere else, which makes it fascinating. It’s not a dry read, either, as Rosenbaum isn’t afraid to throw snark at the likes of Image comics or Michael Bay. Easy targets, perhaps, but it’s still funny.

This said, the book does have a couple of gaps here and there. I mean, while TMNT- contemporary indie comic Cerebus is mentioned, Rosenbaum doesn’t talk about the flood of other indie funny animal comics that came out to mimic TMNT’s success, including Stan Sakai’s classic Usagi Yojimbo, which has actually crossed over with TMNT multiple times.

Is this just an excuse to post rad art? Yes.

Likewise, while Rosenbaum lays out TMNT’s foundation as a riff on Frank Miller’s ninja-filled run on Daredevil, he doesn’t factor in the ninja-craze of the 1980’s that spawned it. He doesn’t address the ninja-backlash, either, like when the show was renamed “Teenage Mutant Hero Turtles” in the UK, because Margaret Thatcher was terrified of nunchucks, I guess. As over time, the franchise got increasingly Bowdlerized, to the point where we get the “The Coming Out of Their Shells” tour. Oof. 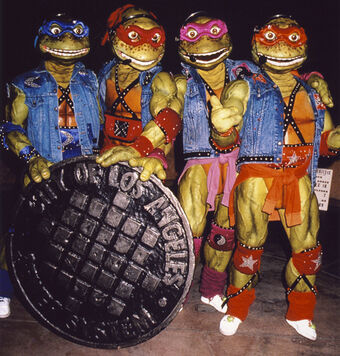 These guys were even on Oprah. Seriously, look up the clips, if you ever wanted to see what rock bottom on a franchise looks like.

Still, I only bring up these tiny quibbles because I’m just a super nerd. Teenage Mutant Ninja Turtles provides a short, readable, and fairly comprehensive look at one of the most popular media franchises of the modern era, and digs into just why something so ridiculous got so popular. I heartily recommend the book for anyone with an interest in the Ninja Turtles, or even anybody who digs nerdy pop culture in general.

I mean, Rosenbaum repeatedly notes that Don is the best turtle, which is how you know he’s done his research.