Elizabeth Bear is an author I’ve been … tangentially aware of for awhile, as I keep on seeing her name get bandied about. It helps that she’s really prolific, having written dozens of novels over the years. Also apparently she married Scott Lynch back in 2016, so good for them?

In any case, I didn’t set out to look for one of Bear’s novels specifically, so much as her book caught my eye while I was browsing the library (or, well, the library app), which is what brings us to her 2020 novel, Machine. 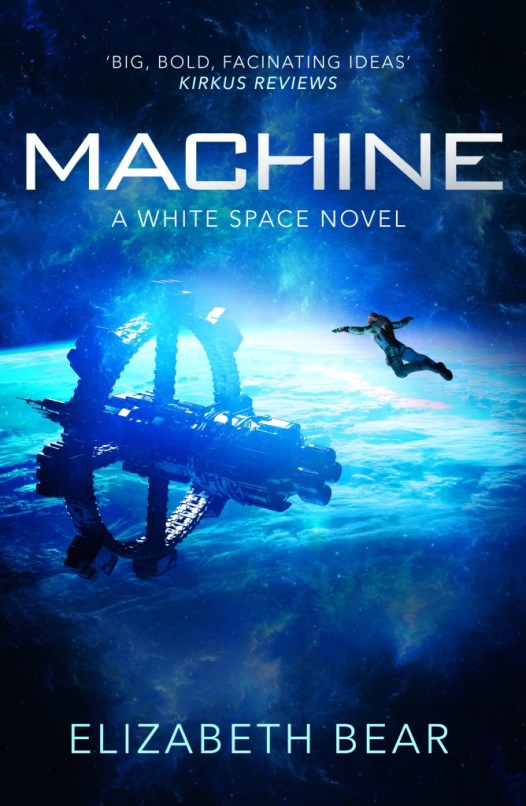 Machine is the second in Bear’s ‘White Space’ series (make your own joke about typesetting here), but it works perfectly fine as a standalone novel. I didn’t read the first White Space book, Ancestral Night, and once things got going I didn’t have too much trouble following along. Though really, Machine doesn’t draw as much from Bear’s earlier novel as it does from the golden-age-era “Sector General” books by James White. Which, uh, I haven’t read either, but I still was able to follow along.

The ‘space hospital’ gimmick allows for all kinds of new problems and logic puzzles and such. Like, how do you perform surgery on a species of sentient crystals that live on a planet so cold that something as simple as a flashlight would give them a lethal dose of radiation? Or how can human doctors get when the smell of coffee is nauseating to every other sentient species in the galaxy? In that, Machine feels like a golden-age SF novel … except for the fact that the novel’s narrator, Dr. Brookllyn Jens, is decidedly not a golden-age SF protagonist, on account of being, you know. A woman. A gay woman, to boot. Neither of which are the focus of her character, either. Dr. Jens is entertainingly snarky, not to mention subbornly determined and notably observant. There’s a hint of noir-PI to her character, actually– which is entirely intentional on Bear’s part, as Machine is, at heart, a mystery.

The book opens with Dr. Jens’ space-ambulance finding a lost colony ship decidedly where it’s not supposed to be, with its crew in cryogenic stasis, watched over by a half-mad AI and a strange, self-replicating machine (hey, title drop!). Things get even stranger when Jens brings her patients back to Core General, where she’s soon assigned to investigate mysterious acts of sabotage going around the hospital. And, naturally, Jens soon discovers some deep dark secrets connecting it all. As you do.

So yeah. While Machine certainly has a lot of slam-bang space opera action, it’s also interesting in that nobody’s running around with a laser gun, either. (Though, admittedly, there is at least one stompy mecha thing). Dr. Jens is an ex-space-cop, sure– but one of the more harrowing (and interesting) parts centers on disaster triage, because first and foremost, Dr. Jens is a doctor. The medical sequences, even centered on greebly aliens, are written well enough to make me if Bear ever worked in a hospital herself.

All and all, Machine is a blend of oldschool mystery-box sci fi combined with modern day social commentary (and a bit of snark). Bear embraces the fact she’s drawing from a bunch of other sources– but at the same time she makes the book fresh and entertaining. You don’t need to read the first White Space novel to understand Machine, nor do you need to dig into White’s Sector General books either, but at the same time Machine is good enough to make me want to. Or really, I should start reading more of Elizabeth Bear’s work in general, as if her other books are as good as Machine, that means I’ve got a lot to look forward to.